Green Wise collaborated on the selection of plants for Marronier Court, the annexe of Tamagawa Takashimaya Department Store that was newly re-opened on 16th October and undertook the greening works.
In a town that interweaves the natural and the urban of Tamagawa, Marronier Court offers a gentle lifestyle full of light and green. We have incorporated many herbs that can be enjoyed with all five senses and created greenery that provides visual and olfactory stimulation for visitors.

The rooftop garden, which has been created for visual enjoyment, is composed of a variety of colored-leaf and pliable plants that sway in the wind, making even better enjoyment of the plants possible. The plants closest to the pavements are mainly herbs which provide passers-by with both color and aroma.

Green Eaves, proposed by Kengo Kuma and Associates, the construction design company in charge of the project, give an even further impression of an abundance of greenery. Flowering plants have been placed in the eaves to give a sense of the changing seasons. The Green Eaves will become more and more covered with greenery as time goes on and, along with creating an intermediary space between indoors and outdoors, architecture and greenery will become one and change together. 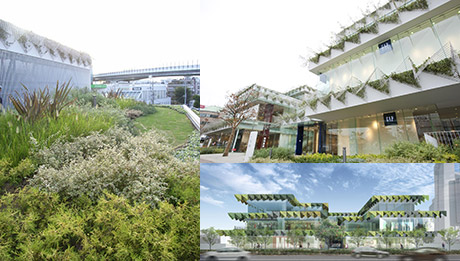